There are a lot of wrestling shows that are better left unspoken about, shows such as Vengeance 2007, Crown Jewel, Great American Bash 1991. However there is one show that stands starkly above the rest of them, that show taking place in late April 1995 in Pyongyang, North Korea….Collision In Korea. It’s one of the most baffling decisions in not only wrestling history but in American and even human history, to go in to an international pariah and host a “Peace Festival”; Made even more stunning with the realization that all parties involved besides that of the North Koreans were of sound mind and body. Now for some context, this show will forever be referred to as the “highest total attendance” in wrestling history, had Ric Flair and Antonio Inoki as the main event, and most damning Hulk Hogan even turned this show down.

This all started with the forging of a business relationship between NJPW and WCW in the early 90’s that saw talent from both sides appearing for the other company. This led to some great things, most notably the appearance of the NWO in Japan carving the way for a certain club to take inspiration from the WCW invaders in the 2010’s. However this very business partnership is also what led to this show, the motivation for which was politically motivated for Inoki at least. Inoki who was in the Japanese Diet (the Japanese equivalent to the US senate) was pushing for Japan to make peace with the North, this did not go over well with the Diet and Inoki took matters into his own hands… the idea was proposed to Eric Bischoff.

April 28th and April 29th would be the days that this “Festival” would take place, and the wrestling was decent if a bit benign, especially in today’s 450 splash happy society of 2019. But what was notable is what is not seen, countless stories of attempted brainwashing, cultural misunderstanding, and just simply being wrong. Bischoff would go on to mention on the podcast ’83 Weeks’ that while being shown around the capital city of Pyongyang he was told by his secret police force member that North Korea had ended World War 2 by themselves. The North Koreans very quickly ensured that this trip was more than about just wrestling, everyone gathered together for the two day event was led around on tours of shameless propaganda; made even worse by the fact that people like Ric Flair, Eric Bischoff, and the Road Warriors were used to help promote the regime.

WCW had to play hardball too, not just with their overlords Turner Broadcasting, but with the United States Government. Flying to Japan to run a show out of Tokyo the night before their flight to North Korea, all of the talent and ring equipment being flown in an outdated military carrier. All in an effort to hide not only from Turner but the country as a whole not only the presence of multiple Americans in a country that was labeled as off limits, and for what you may ask? A show that as soon as they landed in the country started to regret agreeing to; bizarrely however WCW didn’t just stop at doing the show, a handful of months later they put a commentary track over the matches and put it to PPV. It speaks volumes that WCW refused to put this to VHS tape and sell it, or that WWE refuses to air the show on the WWE Network, something that claims to have every WCW PPV.

Bischoff would go on to renounce everything to do with that show, Flair slandered it, but puzzlingly there is one person who still stands by the show and the country as a whole. That lone soldier being Antonio Inoki, who still to this day visits North Korea in the face of the hostility to his native Japan. However unlike those shows that I mentioned at the start of this article it would seem that time has all but passed Collision In Korea by, for a show that was based around wrestling as its highlight the in ring action has been forgotten for the most part. Truth be told it is for the betterment of wrestling history if the world as a whole collectively looked at this, not for the wrestling, the message, or anything like that. The world could certainly learn a lesson from the mistake that Antonio Inoki made that April in 1995. 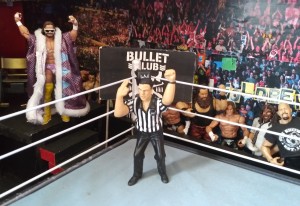